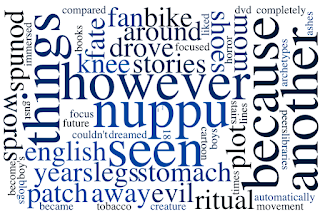 I write like
Anne Rice
About Anne Rice | Analyze your text

The mind flows like a downpour to the street.

"Sorry I've never been a loving adult in your life." reads Nuppu's mother's email. This is a difficult subject. The mother has always barked at her head but such slips, admissions, and telling about things, a lifetime after they have begun to affect her life. Loving others and yourself will be difficult because how can you learn something that even a mother has not been able to set an example for. Can't miss what you haven't received. However, Nuppu has secret resources and has strengths and hope.

In general, women are praised for being beautiful and in appearance unlike men for their character traits. However, she had a plump and symmetrical face, extra pounds, and always had thick thighs. Any hairstyle or cut suited her, and Nuppu could wear comfortable clothes. In gloomy moments, she was hugged by a tight black shirt that revealed soft shapes and a slightly outward bulging stomach. The jeans she had learned to wear in recent years.

As a child in the winter, a neighbor’s girl had pushed her into a ditch and Nuppu had to go the rest of the way in icy colts pants. The girl next door got the chance to take revenge. After all, Nuppu had misunderstood the girl's too friendly approach and mottled this into her nose, after which the girl, because there were no adults at home, had come to patch up her bloody nose to Nuppu and this mother. An apology might have been worthwhile when she was sent away. That time he was guilty. Usually, there was no way to influence what Nuppu was accused of. Mom drove from the wrong intersection and, drove a hundred miles in the wrong direction. Were buying shoes and mom slapped her cheek because the shoes were hard to find wide legs.

Mental and physical violence colored Nuppu's life. Uncle warned the eye of the storm, sheltered from the back of a van, cottage stepfather to be a little kind of man is to look out for. Another rumble that puts in the back of the brain to wonder later when one could talk about it to someone. For adults who drank and vomited as a common hobby, there was nothing to talk about, only to move with them in pursuit of work and dreams. Be angry and grumble and show your mind, and agree to eat only foods that you can make yourself or are almost ready, and ignore that making food causes odors on your mother’s beak. Only chocolate bars and caffeine from the store were brought by Mother to Nuppu.

The upbringing was negligent, and Nuppu knew she had, raised herself more. No one deserves the childhood and things she had to witness. Nobody got Nuppu open and she swore that they knew that if ever you would like to start a relationship with the opposite sex, these relations should be profusely too. She didn't want anyone to know her. Longing for the big city alone and not loved by anyone.

Nuppu was cycling again in the small town to the library and shop behind the house and she rode behind the house into a bush ditch on a bike. She hurriedly thanked her guardian angel until she realized he had been seen. The rest of the day went painfully, the food was pizza made on a ready-made base, and the food knife tempted me to press desperate incisions in the knee. A sprayable patch was found in the cupboard, and whoever had seen her in the ditch with her bike wondered at the wounds on her knee. It wasn't up to the challenge of what Nuppu did to her body. This was the first and last time she ever wanted to hurt herself. The scars were inside or could come into contact with the skin as it stretched, with the stomach growing faster than, enough time to stretch.

As a New Year's promise before the first year of high school, Nuppu decided to lose weight. Two hundred pounds had accumulated. The calendar included entries, a tick, and a zero if you had moved for half an hour that day or had not eaten fattening treats. The pilates program DVD that was found by the mother was selected as an exercise, it had 18 movements and repetitions in each movement. Also, Nuppu began to raise her legs up against a wall with her buttocks near it, working his abdominal muscles at the same time, and in this position, there was at times a little fall asleep until the floor became too cool. By then, one of the blogs started by Nuppu had become a poem from an admirer. Its name was Tobacco, and it told how in the end Nuppu was just sucked in air and there would be ashes left. It reminded her of how she had received love letters from the soft boy in class at the last location in Nuppu School. Another case where Nuppu had to press her head, disappear, literally run away. Namely, they moved again that summer, and Nuppu did not hesitate to say that just when things start to progress and wait for the next school year, Nuppu will start it elsewhere, in another small village. Therefore, Nuppu had decided not to fall in love and not try intimacy with any boy; it scared her, but maybe when he was in the shelters of the city, no one would have to say about her choices.

Nuppu's falling in love had happened as if fate had dropped a chance in front of his window, and she was still not sure who he might have seen. The boy was driving a bike with a helmet on from the end of the ditch when a gust of wind came from the ventilation window and, she saw a creature of her own age, first that summer. It took a long time for Nuppu to notice that she was a fan of one of the boys in the class. Dreamed of him or, compared the boy's future to the archetypes of the stories from which the high fantasy plotlines begin. Nuppu liked libraries and reading and was completely immersed in fantasy, horror, and imaginative, age-devastating books for her peers, equally focused. He could go down the stairs and focus on the cartoon so she couldn’t hear or see anything, automatically just came down foot after foot. The first book that the girl had found in the first grade of her school library contained an evil aunt who was fat as well as a wizard whose pets together tried to prevent the horrible plot of evil that those together had to take. The book took place over one day and could be read in a day at that age or maybe Nuppu was up to a couple of years older than the age recommendation, and no Evening Stories were read to her except perhaps Dad’s new female friend from the big red-covered storybooks if asked. In the summer Nuppu spent waiting for fate to bring him even something to look forward to, and she fell in love with the idea of ​​a boy to admire, he heard a program on the radio about witches. Her step-father had a computer and Nuppu only got to the Internet, so after hours of researching in English, about witchcraft, she called himself a spell, letting the universe tie her on a pagan path… In the middle of that ritual, Nuppu was startled when it started to rain so much suddenly when the puddles formed deep and he concluded that ritual, in her way, thanking that nature had heard.

Nuppu wrote a lot but not as a book. No one taught it. Native language teachers were as bad as foreign language teachers. Standing in front of the class demanding silence or we learn nothing. Showed videos to the class or put up a search for words endlessly around the words written around the class. Swedish could just as well have been German. However, Nuppu had always wanted to learn English and remember every word after hearing it once or reading it somewhere. This was influenced by the taste in music and bands she was a fan of. Series watched on television at midnight that was still banned for ten-year-olds. The on-screen subtitles were easy to combine with the movements of the mouth. "My name is Stephanie." There were the first shifts she understood on TV as a girl.

Nuppu had not yet made her most impulsive purchases or most famous tricks, as he is known today, or followed the world equally intuitively through his own gray eyes, but she was open to trying anything that did not contradict his unyielding, unconscious, self-defending decisions. Driven by their innermost fears towards the latest disappointments.