No, Pattison and Jon Snow did not make the cut 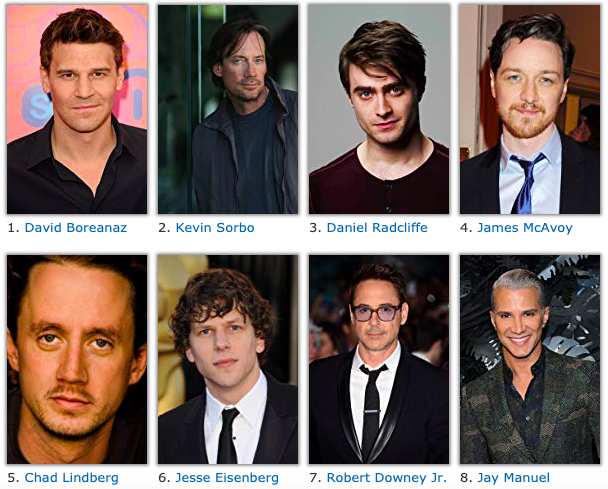 Male Hollywood Crushes ever. Well there's Angel and Hercules, but also young mr. Potter. There's Charles Xavier, and Lex Luthor but I was impressed by Robert Downey as a red haired nurse in some thriller and I watched so much America's Next Top Model that I was pretty taken by the Jay beauty... then there's the LiveMe celeb who I talked to a lot on there. I need to find some new crushes I can't just have an imaginary Legolas friend or like, swoon anymore after Ville Valo from HIM xDD

It feels good to be old. Seen so much movies I scrolled to the bottom of the list on popcorn-time and there's literally nothing more to watch. Granted I haven't seen Chucky movies or every movie I thought I would but for now I'm terribly good. /ooh, I have to add Benedict Cumberbatch now though... I had a dream about him once!

No reviews, just bingewatching my life away... everything from Exorcist to Tim Burton Movies, all the fantasy and sci-fi, zombie apocalyptic alien, and every comedy drama and biographic film or document or cartoon musical. I must have seen hundreds of movies. I used to keep track on icheckmovies.com or similar site. The thing is I don't want to watch black and white, classic "gone with the wind" or Japanese/Bollywood etc things.